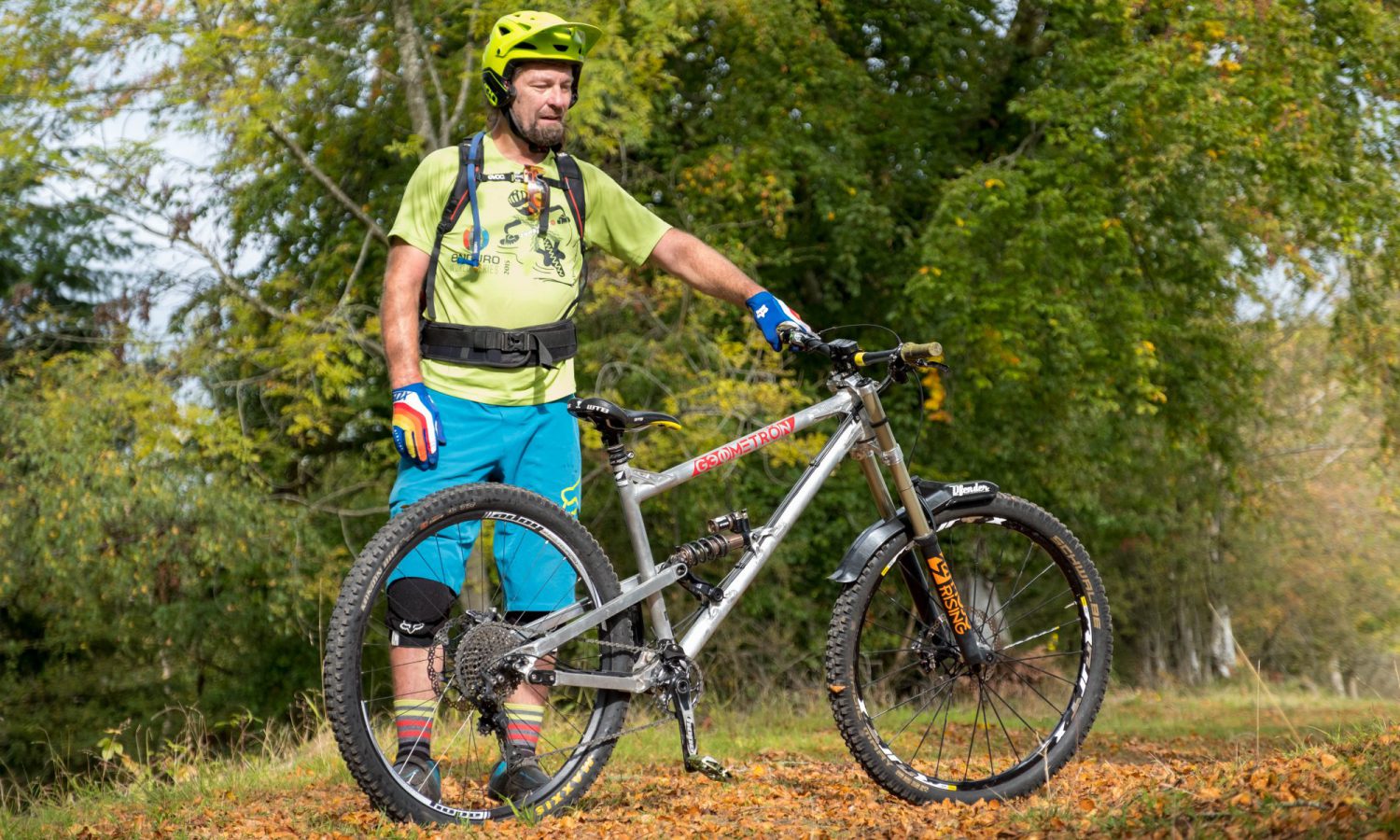 Chris Porter isn’t a man to mince his words, especially when it comes to bikes. Vehemently opinionated, but certainly not lacking in understanding – after decades of racing and years of suspension R&D under the banner of his old company Mojo – he’s someone with a real inquisitiveness when it comes to making better-riding bikes. Chris was one of the original exponents of the long-and-slack geometry concept, and is the main man behind GeoMetron bikes. Besides exemplifying his theories on geometry and set-up, the 175mmtravel G16 we see here is a test mule for all of his pre-production ideas.

Its sheer size is its most immediately striking feature. The massive 535mm reach is accentuated by 451mm chainstays and a 62.5-degree head angle, making this one of the lengthiest bikes in existence. Chris wanted to build a bike that descended like a downhill rig but climbed like a trail bike, and he’s a firm believer that this bold geometry puts you in the optimum riding position to do just that.

But can you still chuck it around? “I’m riding more dynamically on this bike than I ever was on a short, steep 26-incher,” he responds. “For me, speed is fun and I’ve made a bike to fit the job. On the stopwatch I’ve actually found that the XXL can be even faster [Chris rides an XL], but in certain situations I don’t have as much flow and this size gives me the best balance.”

A flip chip at the head of the seatstays lets you adjust their length by +/-7mm to accommodate either 650b or 29in wheels. Unusually, Chris runs a 29er front wheel and a 650b out back. He reckons this gives him the best of both worlds – the larger front wheel rolls over bumps better and the smaller rear gets drive off the backside of features. Steering is better too, he claims. “When you lean a bike over, the front and rear axles describe different arcs, so the more balanced you can make the steering, the better your handling mid-turn will be. The fact that different-diameter wheels aren’t sanctioned by the UCI makes me love them even more!” he laughs.

Another controversial aspect of Chris’s wheel choice is his belief that it’s possible to have too much grip. “Because your weight is over the rear wheel, if it’s overly grippy it really slows you down,” he explains. For that reason, he uses a fairly narrow (23mm internal) WTB KOM rim at the rear, but bulks it up slightly with a Maxxis Minion DHR II 2.4in Wide Trail tyre. His next experiment will be to add some Mr Wolf SmartMousse, in an attempt to eliminate punctures and add damping. “Tyres and rims are just shit at the moment,” he exclaims. “Aaron Gwin is being paid millions of bucks and he still has races ruined by punctures!”

You’d be forgiven for mistaking this bike for a DH rig, due to its dual-crown fork. Chris is running an air-sprung Fox 40 (shortened to 170mm) for two reasons. Firstly, he’s not a fan of the deflection and stiction you get with an inherently flexy single-crown fork, and reckons that once you’ve tried a dual-crown there’s no going back. And because of that, he’s trialling an upgrade kit for Fox 36 forks, which he’ll be bringing to market with Mojo Rising.

Also notable on Chris’s fork is the lack of gold Kashima coating on the stanchions. “The coating isn’t the panacea we once thought it was,” he explains. “From testing, we actually found that a rougher finish holds oil better and reduces stiction. It also makes the fork look less like a Fox!” he adds with a grin.

The back end of the bike is sprung with an EXT Storia coil. “We stumbled across EXT when Fox stopped supplying to us and we’ve been really impressed,” Chris says. “Their attention to detail is exceptional, even to the lengths of sanding every shim. The Storia is naturally progressive too, so I can drop my spring rate by 100lb and make it more supple.”

Not only is the seat tube steep, at 77 degrees, but the saddle is set at a fairly extreme nose-down angle. Chris says the ‘winch and plummet’ style of UK riding means that when you’re sat in the saddle you’re always climbing, so the seat should be positioned accordingly. His carbon Renthal Fatbar is rotated a long way forward too. He explains that this opens his elbows out and means they stay upright when he loads the bar. Chris hangs his DMR Deathgrips over the ends of the already-wide 800mm bar by 10mm. His theory is that the wider the bar, the higher your wrist when you lean the bike and the less it needs to bend.

All these concepts combine to create a bike that looks and rides very differently to the norm. With Mojo Rising, Chris now has the freedom to test out his ideas and this bike is the vehicle for all those refinements and experiments.

Back to the top