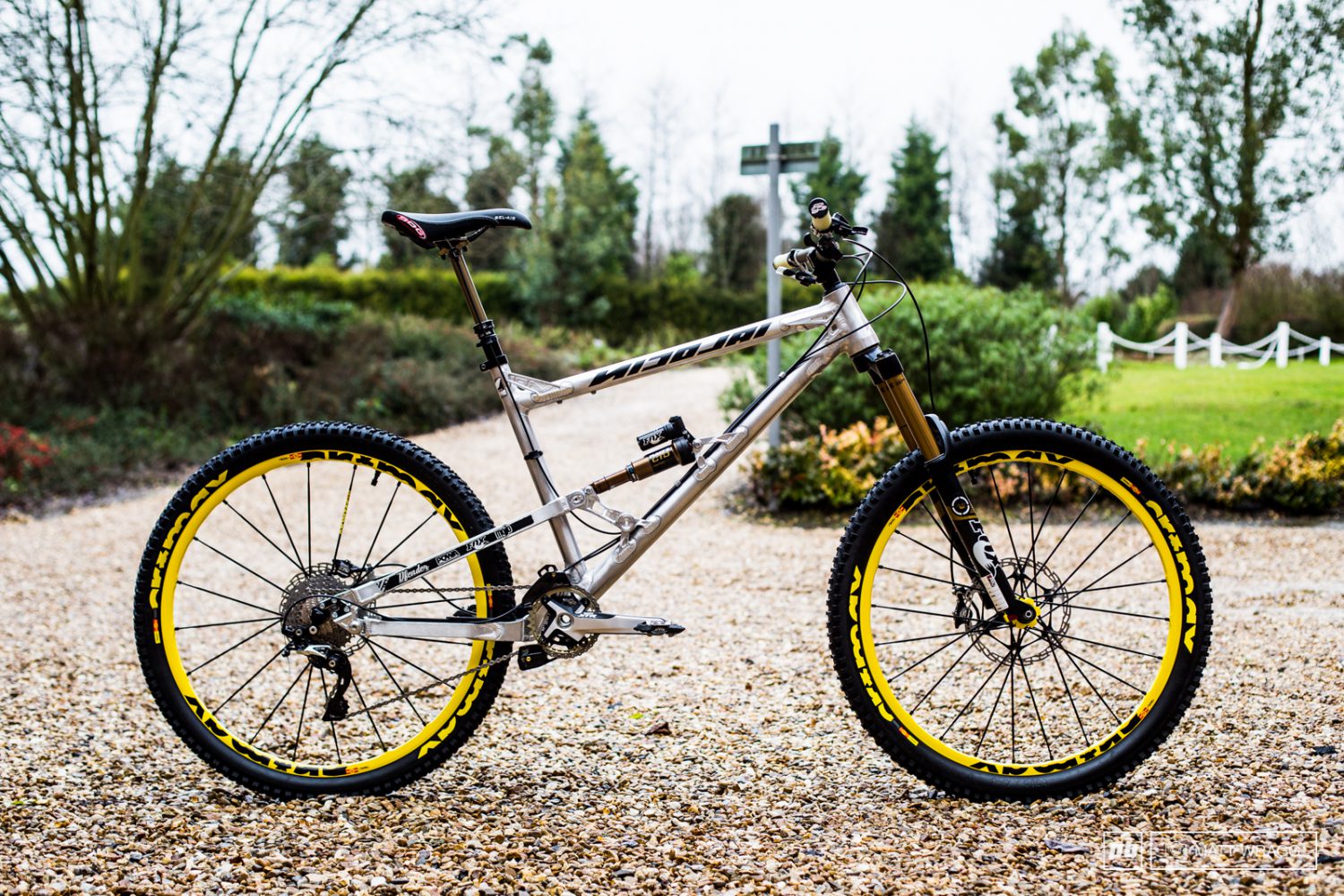 When we started the GeoMetron project quite a few years ago we accidentally lit a little bit of a fire under the industry ?
It smouldered for a while but now with literally everyone using the phrase ‘longer, slacker and lower’ in their marketing it seems to have caught on!

We ordered a bike from Nicolai on their ‘special projects’ program because we had reached the limits of angled headsets, custom shock lengths and fork lengths, hacksawed seat tubes, etc… It was just for ‘us’, so we could ride a bike that handled well… Rick at Works Components was doing me custom 3° angled headsets for straight steerers, I had a shock with a configurable negative chamber (a Specialized ‘Autoslag’ air sleeve with a real valve installed) that allowed a configurable shock length and I was hacksawing 36 fork braces to run 27.5 wheels with 37mm offset forks with custom ‘everything’ inside! With these mods we’d managed to get 63° head angles on 37mm offset forks, 1280mm wheelbase, 440mm chainstays and 335mm bb height in 2013… Trouble was, every time we tried longer, slacker and lower it went better. Great, no problem! But we just could not get more from the custom shocks and forks and there was no more room in the head tube for angled headsets, so maybe even slacker or longer or lower would be better?… Besides, I was tipping the frames so far backwards I was grinding so much material from the seat clamps to try to keep the saddle in the right place I needed a steeper seat tube too!

Nicolai were brave enough to build us the bike we asked for and we ended up with the start of accidental project! The first ‘Mojo’ Ion 16 arrived and it smashed all our times on the hill going down, but also broke records going up! The journalists loved it because there was something to actually write about rather than just another standard… The rest is history ?

Now we are flattered to find that after using the ‘longer, slacker, lower’ phrase for ‘short, steep, high bikes, some of the manufacturers are actually starting to make bikes actually as long, slack and low as we were making 4 years ago! Despite assuring all their customers that it would never work, you would never get round corners or uphills… Now they are offering it because it does!

The arrival of the 2019 Specialized SJ Evo to go along with the Pole and other boutique Geo followers is just a great confirmation to any customer a little nervous of making a change to GeoMetron… Even Specialized built a bike so their testers, designers and riders don’t have to ride the old geometry anymore! Get with the program!

We’ve sold GeoMetrons to journalists all over the world who want to ride this ‘deviant’ geometry (Thanks PinkBike for that one ? so that they test product on a bike that handles… We’ve sold bikes to designers working on very high end projects for other manufacturers who have been influenced by it and are offering their customers better bikes because of it. We’ve sold bikes that have ended up in positions of influence around the world and some which went to NorCal where the Specialized designers got a chance to actually ride this deviant geometry (after I’d taken their DH test track KOM a year or so previously on my Geo trail bike ;-).

Whilst it’s true that Specialized have made a very brave bike for a large manufacturer, they are still several years behind us in terms of head angle, seat angle, BB height, chainstay length, rider space and frame flex. Let’s not even start to muddle their brains with suspension set-ups and their effect on dynamics, weight distribution, cornering dynamics, sprung/unsprung weight ratios, pedalling efficiency, neutral gears, etc… ? Rest assured that when you decide to test ride a GeoMetron with us, you’ll have 3 or 4 years before the others catch up. By then, we’ll be a little bit further ahead again!

Check out the Geometry numbers on the Specialized and our first 2013 project bike pictured here and still going in the GeoMetron wider family! Pretty darned close but now over 4 years old! ?

Back to the top